Located at the heart of the Exotic Garden, the Observatory Cave plunges vertically down for around one hundred metres until it reaches sea level. The “underground cathedral” has, over time, provided shelter for three human species: the ante Neanderthals at -200, 000 years, the Neanderthal man at -60, 000 years and modern man around -37, 000 years. Thanks to the tools which were found in this cave, different human cultures have also been identified. Limestone bifaces, touched up splinters of stone and flint blades were among these tools. 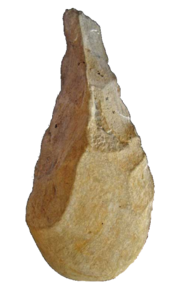 Animal specimens, which were remarkably well preserved, were also found in this cave. Among these specimens, some of the most notable finds were ones which are now extinct, such as the Merk’s rhinoceros and the cave bear or species which have migrated, like the arctic fox or the panther. Other animals, which to our eyes are less exotic, were also identified, such as ibexes, dear or horses.

These relics are kept in the Museum of Prehistoric Anthropology. This museum was founded in 1902 by Prince Albert I, who was enamoured with scientific truth and wanted to spread knowledge to the masses.