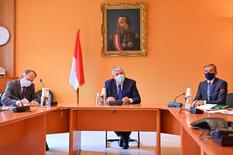 This morning, at a Press conference, the Minister of State, H.E. Mr. Pierre Dartout, accompanied by Government Ministers Didier Gamerdinger and Jean Castellini, announced the economic recovery plan drawn up by the Prince's Government in consultation with the National Council and social partners.
"This €75 million package, submitted to the vote of the National Council, will make an ambitious and realistic recovery plan possible, in a context of vigilance and engagement, in which the Government must strike a balance between health constraints and recovery measures," declared the Minister of State.
This recovery plan is based on four main aspects:
- The "National Green Fund," with the aim of speeding up energy transition in line with the wishes of H.S.H. the Sovereign Prince.
- The "Blue Fund," with the aim of assisting Monegasque businesses with digital transformation and creating a digital economy in Monaco.
- The "White Fund," with the aim of supporting building and construction activity in the Principality, and
- The "Red and White Fund," to support local trade and purchasing power in the Principality.
Other strong social and economic measures include extending the strengthened provisions for temporary layoff (CTTR) and the partial exemption from employers' contributions until October, the extension of teleworking until December and maintaining the CARE scheme until December.