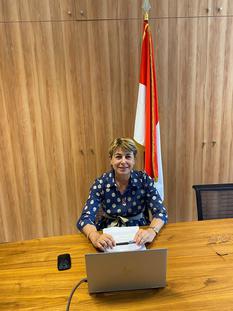 The Principality of Monaco participated in the 42nd session of the International Organisation of La Francophonie (IOF) Conference held on 6 October. The purpose of the Conference was to hear from H.E. Ms Louise Mushikiwabo as part of her candidature for the post of Secretary-General of the IOF, elections for which will be held at the 18th Summit of Heads of State and Government in Djerba on 19 and 20 November 2022.

The Secretary-General of the IOF gave an overview of the reforms to modernise the organisation which have been undertaken since 2019, and set out her vision of La Francophonie, as well as the priorities on which the IOF’s teams will focus their attention over the next four years.

Reiterating the full support of the Monegasque authorities, Ms Isabelle Berro-Amadeï, Minister of Foreign Affairs and Cooperation, welcomed the efforts made by H.E. Ms Louise Mushikiwabo and her teams during her mandate, noting that despite the unprecedented context characterised by multiple crises, they have been able to continue reforming the institution while also supporting the most vulnerable populations.