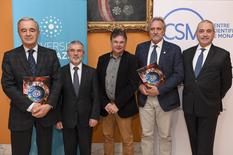 On Monday 3 February, Professor Patrick Rampal, Chairman of the Monaco Scientific Centre (CSM), and Jeanick Brisswalter, President of the Université Côte d’Azur, signed a partnership agreement in the grand hall at the Ministry of State, surrounded by H.E. Mr Laurent Stefanini, the French Ambassador to the Principality, and Patrice Cellario, Minister of the Interior. Through the agreement, the two organisations have decided to establish an international associated laboratory (LIA) titled “Response of organisms and populations to environmental stress”.

The new laboratory, which will bring together several teams from both sides, will help to strengthen collaboration between the CSM and the Université Côte d’Azur in the field of scientific research, innovation and training. It will promote collaboration in areas of research likely to attract future researchers and establish a collaborative approach to the study of climate change impacts that could lead to recommendations for society.

The scientific aims are:

The CSM has historically developed a number of relationships with the Université de Nice-Sophia Antipolis, which recently became the Université Côte d’Azur. Several lecturers and researchers from the university have participated in the work of the CSM since the late 1960s, including Professor Raymond Vaissière and Professor Jean Jaubert. The CSM’s Scientific Director, Professor Denis Allemand, was himself Professor of Animal Biology at the university.

AVIP - An Association to Help Victims of Violence

The Committee for Graduate Employment Celebrates its 10th Anniversary