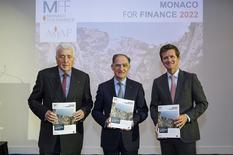 On 9 November, the Monaco Association for Financial Activities (AMAF) launched the latest annual edition of its magazine, Monaco for Finance, a tool to promote the attractiveness of the country’s financial sector.

After offering his thanks to the participants, Mr Franzi welcomed Mr Castellini to the podium. The Minister emphasised the resilience of the financial sector and its contribution to creating wealth and jobs in the Principality, then discussed the good relationship between the public authorities and finance industry professionals. He announced the creation of the Monaco Association for Sustainable Finance (AMFID), whose mission is to facilitate the sharing of experience between AMAF members who are experts in environmental, social and governance (ESG) issues, and to promote a sustainable finance culture in the industry. The passing of the DDOEJ Act on various economic and legal provisions, which introduces new legislation to help increase the attractiveness of Monaco’s financial sector, was also welcomed, as was the Principality’s accession to the International Organization of Securities Commissions (IOSCO), offering protection to investors.

Mr Gérald Mathieu, President of the AMAF Committee on Promoting the Financial Sector, brought the launch to a close by talking about the association’s plans for 2023 and the strong commitment of its members to making the sector a key factor of Monaco’s appeal, helping it to attract new talent.

“CELEBRATE YOUR NEIGHBOURHOODS” in the Principality