Official unveiling of Lartigue fountain as it returns to Larvotto 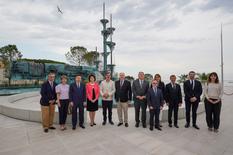 The Lartigue fountain, an emblem of the Promenade de Larvotto since 1970, has been reinstalled on Place Joséphine Baker after an absence of three years.
Dismantled in 2019 so that it could be protected and restored while the beach resort underwent renovation work, Guy Lartigue’s monumental work has been brought back to its former splendour thanks to a remarkable effort to clean its copper, brass and bronze sculptures, structural repairs and replacement of the hydraulic system that powers its water jets and lighting.

The artist’s son paid an emotional tribute to his father, who passed away last year. Brice Lartigue, who has inherited his father’s passion, works on restoring and maintaining his pieces. A “passing of the torch” that has particular significance in his eyes, coming 50 years after the “Tribute to Princess Grace”, commissioned from the sculptor by Prince Rainier III, was created, and requiring support from the same government departments and the company Pastor, who made the original installation possible at the time.

A symbol that the Principality’s cultural heritage and a certain expertise is being passed from generation to generation, the Lartigue fountain is just waiting to be rediscovered without further delay!

Description of the fountain:

The vertical fountain and circular pool, 9.5 metres in diameter, comprise a series of bowls attached to masts, over which the water cascades.
The tiered water feature and its 17-metre-long, 4-metre-high pool mark the end of the promenade. The ensemble creates a small square which is designed to be a relaxing, sociable spot, recalling the Principality’s palaces with its “baroqueism”, as the artist described it.