The Board of Directors of the Prince Pierre Foundation, chaired by H.R.H. The Princess of Hanover, is pleased to announce that Cristiano Raimondi has been appointed as the new Artistic Director of the International Contemporary Art Prize (PIAC). In this capacity, he is now responsible for coordinating one of the most prestigious prizes in the contemporary art world. 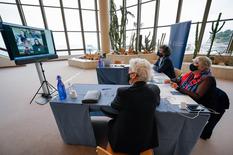 Cristiano Raimondi is an exhibition curator and scenographer. He is keen to encourage collaboration between artists, curators, collectors and museums, and places contemporary creativity at the crossroads of history, design, fashion and the human and social sciences.

His project is characterised by a wish to breathe new energy and dynamism into the PIAC, while maintaining the continuity of its heritage and artistic lineage, which have inspired it since its creation. Mr. Raimondi hopes that "the next prize might be awarded to an artist or collective with a sensitive approach to issues relating to environmental sustainability, human rights, minorities, and sciences related to ecology."

He suggests that the next winner "must have developed a particular way of thinking that is part of a vision of diversity and cultural mix, nourished by a relationship to coastal and maritime places."  He rightly likes to remind us that, like the Mediterranean Basin, territories with a coastline were "the theatre that made it possible, in particular, for many different forms of knowledge to converge; these were then disseminated throughout Western cultures. Dialogue with others is one of the catalysts that open the way to new forms of artistic production and knowledge. "

With this in mind, Cristiano Raimondi has gathered together a team of international experts from the art world to form the Prince Pierre Foundation’s new Artistic Council:

He has thus chosen artists and curators who are confronted with different types of knowledge and cultural influences and who have a creative, resilient sensitivity. For all of them, collective and interdisciplinary work, education and research as means of artistic activity are central to their approach.

As a reminder, the PIAC was first awarded in 1965. Every three years, it recognises a recent work proposed by the Artistic Council. Under the Presidency of H.R.H. The Princess of Hanover and the Vice-Presidency of Marie-Claude Beaud, the winner of this prize receives the sum of EUR 75,000.

Previous finalists include Arthur Jafa, who was presented with the award in 2019 for his work "Love is the Message, the Message is Death" (2016), as well as Rosa Barba, Dora García, Guido van der Werve, Didier Marcel, Candice Breitz and Carlos Garaicoa.

For all the latest news from the Prince Pierre Foundation, see:  www.fondationprincepierre.mc