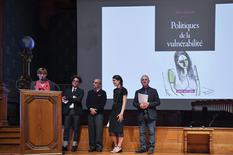 The Monaco Philosophical Meetings Prize Awards Ceremony, which took place at the Oceanographic Museum on 7 June, featured several highlights, including the prize presentation ceremony with members of the Juries.  This year's winners were:

- Marie GARRAU, for Politiques de la vulnérabilité (Politics of Vulnerability) (CNRS Éditions), who was awarded the 2019 Prize for a philosophical work published in French in the calendar year preceding the award;

- LES BELLES LETTRES, which was given the Honorary Mention, which recognises a French-language publishing house that has distinguished itself in the publication of innovative philosophical works.

The evening opened with a lecture by Etienne Bimbenet, winner of the 2018 Prize, on the subject of "What is Philosophy?"  This was followed by a captivating musical interlude by the percussionist Adélaïde Ferrière.

The 4th Colloquium was an opportunity for the public to meet the five authors who were finalists for the 2019 Prize and take part in twelve "Lessons in Philosophy" on Saturday 8 June at the New National Museum of Monaco - Villa Sauber, the aim of which was to present the thinking of major 20th century philosophers, based on a concept or a theme, a subject or object that is central to their work.

The lecture "Qu’est-ce que la philosophie ?" ("What is Philosophy?"), given by the winner of the 2017 Prize, Emanuele Coccia, at the 2018 Colloquium, was published in June by the Monaco Philosophical Meetings.  It is available on the website www.philomonaco.com .  Further information:  contact@philomonaco.com